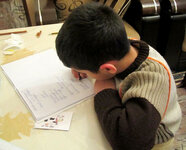 You can create without writing. But without writing you’ll have to review your creation, if your memory is lacking. Writing and scientific reflection make it possible to elaborate the best creations.

Everything you create requires you to prepare. We can develop a whole process in our mind. Only the notes that we will have taken will be that will make our approach, not only because we will have written them, but also because they will have been criticized, reviewed, improved afterwards.

It is said that Mozart wrote his scores in one go. But, before, his letters had initiated a discussion to human’s limits, those whom speak about everyday life, in order to tell to others. He caught with his music the human behaviors, reading them to analyze them.

If you create without writing, so without contradicting yourself, without going to the human’s limits, believing that you must please others, you lose conviction and therefore persuasion. Even those who lie know that. The most outspoken liars lie on the human’s limits, so that you believe in it. It is why that some of our limits are hidden.

Going to the source as a journalist helps you to keep your virtue, to seek your truth for your own happiness. Virtue is eternal, if everyone wants his own fulfillment and civilization.s eternity. To seek one’s own fulfillment is to seek first of all how to defend the future of human civilization, because eternity and creative reason are allowed by civilization.

It is therefore important to write as soon as the desire comes. Indeed we will ask more easily to question himself saying why, since his writing will be able to grow more easily. We can better sculpt what we have thought. One will be able to approach the human’s limits, to remain there with his writings, becoming then real readings to his eyes.

Write as soon as you think you might forget something.

Use writing in your creative activities.