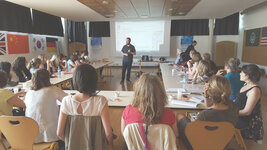 I’m not a Rebel
Creative Common by SA License

If we are not rebellious, we will find what has been found, with our scientific reflection. But it can be used. If we have really found that existed, it is because we are able to explain at the moment the approach of the one who found it. That’s even better. We are the one who can best explain an author’s approach.

So it’s about writing. It is about rising our imagination even further, loving this discovery. His diary then helps to trace the path to understand science, which will allow others to find. It is the authors’ approach that is more important than the mathematical formula itself. Indeed Einstein had not found the Formula E=mc2. Others had done it before him, before Poincaré also. Einstein challenged him to Newton, the one that was praised everywhere, even now. If you understand Einstein’s childish approach, which consists to get in his mind, the whole of scientific reality, ending up challenging the most praised, you too become a rebel, because Newton is still praised.

Write about that we know. Then get interested in something and write about it.