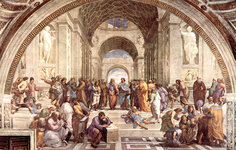 Why to Philosophize ?
Creative Common by SA License

There is a lack of self-understanding, so of society understanding, with people. Also, the elite, or the future elite, is regularly claimed for prestige. Thus our engineers and scientists are not sufficiently interested about their own growth, because they have got their training prestige. They will even think that the position they occupy is not prestigious enough.

Many adults of my generation still believe in cartoons. In the television news, we have seen violent cartoons shown forward. Many adults believe that children do not pay attention, in the first degree, cartoons. This is the case if the child sees the school as the solution, which is rarely effective. Indeed, it is said that the school is used to finding a job, not to grow.

Most often, the child will refer to his friends, whom will then refer to cartoons. This is very dangerous, given the intellectual poverty of cartoons, increasingly violent and silly, with the media liberalism’s growth. In 2013, the generation of assets experienced rather nice cartoons. But what was the repeated frame in these videos? It was repeated that only one person was always right. There was always that amalgam of the perfect person, with a child’s voice, which could even be more cruel than the wicked, by killing them. The bad guys had a certain voice.

This brings to the assets many deviant behaviors. So those whom believe most in the cartoons of the gentile who fights the bad guys will want to eliminate the one who goes against them. Whoever is perceived with a voice that is out of the ordinary is seen as a problem. Everything that is trivial is forgotten, because the cartoons most seen do not allow to be interested to the society’s details. It affects the elite watching these videos.

French society is a society where competition plays. Thus the population, possessing a philosophical, scientific or artistic approach, does not dare to express itself. In fact, philosophy is learned only in high school, whereas philosophizing could be learnt from kindergarten.

Also the error’s fear makes that the student and the employee feel watched. Indeed the teacher and the leader, because of the competition, itself due to our non-development, repress errors. Thus creative group’s work will be very difficult to achieve because students or employees will laugh at a poorly sayed proposal. This creates an unproductive self-censoring environment.

Finally, the student does not know that beauty is perceived as linked with the eternity of our civilization, that is to say our history and our future. So a beautiful work is not technical above all. History and approach are above all.

It should be noted that it is impossible for many to act, because they do not listen to music that makes you thinking to act. Indeed we are taught to be a spectator listening. But classical music engages you in a brainstorm, making you an instant inattentive to your listening.

Often children use the philosophy or the scientific spirit, requested by the parents. The child has a conscience from 5 months. He can, from this moment, have a talk with his parents, more and more active obviously. But the school did not teach parents to know each other. This is why many people rely more on television than with school.

Parents did not learn to argue scientifically according to Plato. This, however, allows the student to know how to grow, if he also understands what is the common good. Parents have often repetitive work. They fall back on the school, to grow a scientific and philosophical discussion. One finds then disappointed parents from the school, whose they know about the causes of their disillusions, whose they also had got as pupil.

Some aggregates of this base are learned in engineering school. In these schools, students are often set up as future models for others. This beginning of scientific thinking is not only too late, but it is regularly repeated that it is about prestige, not about advancing society. Prestige can be understood, then, in different ways, whether for oneself or for others. In many schools, it is a question of copying the greatest, having used this will since their childhood, without really knowing their psychology or their approach. In other words the engineer can not, with this university, become a greater one, because it starts from too low. Some rather opportunistic examples are bad examples. Newton’s apple was used to hide Leibniz, more famous in his day.

Not only this engineering school will have hidden from him that it is growth that creates peace, according to Mazarin and Democratic Greece, with the Egyptian Middle East. But also he believes that his search for truth brings him prestige, while prestige is antagonistic from the search for truth. The search for truth is for others and for oneself, whereas the pursuit of prestige is quite optional in this research. Many of the best discussions I had with others were a detailed problem’s understanding in society. The behavior of an entire society can be explained with only one detail of society. Prestige aims to hide this necessary humility. How can one be prestigious at 25? Yet the 25-year-old replaces employees with experience.

The older ones started from personal problems that engaged them. Do you think we think like them? We must therefore seek to solve each problem that arises, so as to awaken his conscience asleep by this so-called elitism. It must be understood that it will be the others who will talk about us when we are no longer there. We must remember that we will abandon our property, necessarily. But we must above all be wary about that our conscience has accepted, by repetition.

To understand oneself, there is nothing better than philosophizing, to strengthen one’s ego, while being wary of oneself. If everyone manages not to grow his defects when we do not know a solution, philosophizing, defining and then questioning its limits, so we use his interlocutor’s scientific brainstorming. We can then strengthen his personality.

The common good’s sense makes it possible to avoid risky choices. This subject, opposed to the evil, makes it possible to avoid risky choices, if it is common. For example, we know that if the currency is public and national, the nation that owns this currency can do much more. One could also add as a common good a public health and a social security, allowed by a national and public currency.

Our mind is then freed from our ideas’ showdown, preventing us from building. Like the Greeks, we can then build, to link our ideas. Then we feel with others through scientific and philosophical dialogue. So we rise, to strengthen our ego.

Then, later, a higher hypothesis on our ego fascinates us, will fill our flaws, to find the most beautiful talent in us. Our mind will change, with this new frontier on our ego. While growing, we will then find new benchmarks. We will not hesitate to create with people, knowing that the error is allowed in politics.

Seek to understand your education’s failings, these shortcuts that you use and that prevent you from linking ideas, thinking better.